Social Anxiety Made Me Scared To Ask A Question

Here’s my personal account of how I dealt with this struggle in the workplace, specifically

I was scared to ask a question because of social anxiety, plain and simple.

How about that? You can do a Bad Boys remix about anything it seems.

See, social anxiety paid a visit every time I readied myself to ask a question. It breathed down my neck and reminded me of how weak I was. Vulnerable, insecure, and scared.

The simple act of asking a question took such prominence in my mind that social anxiety appeared by my side whenever the urge came to open my mouth. It revealed my inability to speak up.

It came so often that it just became part of the routine. When I’d gather enough courage to interrupt someone with a follow-up question, it would suddenly appear, tap me on the shoulder, and whisper, “Don’t ask. They’ll laugh.“

It ripped my confidence apart each time it told me: “it’s a stupid question…what kind of dummy doesn’t know the answer to that?“

No wonder I was scared to ask questions in all areas of my life. It wasn’t just at work that I struggled. I couldn’t bear being known as the idiot of the community that didn’t know simple truths or, even worse, had no common sense.

At some point, I stopped asking anything.

The fear of facing my social anxiety inhibited me. And it was always lurking around, ready to remind me to “not ask stupid questions.” My insecurities plagued me, so I did everything possible to avoid asking questions.

If I needed an answer to get work done, I’d walk up to the person and ask in a one-on-one setting or write it out in an e-mail (if I even bothered to remember).

I never had the nerve to ask a question out loud in front of *gasp* PEOPLE.

I had panic attacks at asking questions as if I were getting ready to enter a boxing match. My hands got sweaty, my heart raced, and my breathing was shallow.

With time, I realized that I was the one giving it control over me. I understood the negative consequences of not asking a question, namely being left out in the dark.

That was probably more excruciating for an ambitious introvert like me than facing my social anxiety.

I was missing out on knowledge, information, and connections.

I deprived myself of these beautiful things because I chose to believe what social anxiety whispered. Thankfully, my social anxiety weakened after many years of struggle and using my action plan to practice asking questions.

And when I finally felt comfortable enough to ask questions, I realized how much knowledge I had left on the table all those years.

For example, the other day, I asked a question in a Facebook Group because I needed to figure out how to approach my newsletter and needed some advice.

A total stranger changed my entire perspective on addressing my audience, which impacted my whole personal brand.

This made me think: what else did I lose out on because I was too scared to ask a question?

I’ll never know. But I know I have more to lose by being scared to ask a question.

Don't miss out on anything else

GET THE WORKBOOK NOW

I now make it a point to ask whatever pops into my mind. Regardless of what it is or who it’s directed at. Instead of being scared of people staring me down, I now fear not getting the correct information to give me the extra edge.

Because that’s something I’m fearful of. And you should be too.

And because social anxiety prevented me from asking questions for many years, I want to ensure that doesn’t happen to you. Who knows what golden nuggets you’re missing out on?

For example, the house next door to Hugh Jackman is on the market.

While I can’t hold your hand or ask the question for you, what I can help you with is to reframe how you feel about the ACT of asking a question and challenging the EXPECTED RESULT that comes out of it.

If you’re scared to ask a question because of social anxiety, remember these 4 things:

1. the Dunning-Kruger effect isn’t about you

I was scared to ask questions because I didn’t want to sound stupid. Not because I thought I knew everything. There’s a difference between the two.

By not wanting to hear snickers and whispers behind your back, you’re overlooking something much more important in your quest to preserve your image as an intellectual (an all-knowing being who never asks anything because it knows everything).

That something? An intellectual’s biggest strength is knowing they don’t know anything.

Socrates, the great stoic philosopher, once said: “Well, although I do not suppose that either of us knows anything beautiful and good, I am better off than he is – for he knows nothing and thinks that he knows. I neither know nor think that I know. In this latter particular, I seem to have the advantage of him slightly.”

Someone that overestimates their ability and knowledge, but has limited expertise in general, will not seek to ask questions. They think they know everything. And it’s these individuals that suffer from the Dunning-Kruger effect.

The fact that you WANT to ask questions, by definition, makes you NOT stupid.

2. There are 295 exabytes of information floating around

Do you expect to know everything? Can anyone? Think about the enormous amount of information circling all around us!

You’ll need to live about 100 lifetimes to touch every piece of data, and even then, you will need to understand some of it. And by that time, it probably would have quadrupled, so even then, you’ll only be touching the surface.

It’s inhumane to put that kind of pressure on yourself.

Whenever you feel tight in your gut, think about all those exabytes floating around, and ask away.

3. No one will remember what you asked

But you sure will remember the answer.

Can you remember a question someone asked the teacher in 10th grade? Other than “didn’t Al Gore invent the internet?”.

Because here’s the thing, you probably only care enough to remember if you had the same question. Most people are too self-involved with their thoughts to pay attention to what’s happening around them.

And if they do care, it’s because they’re part of the discussion, and they’ll appreciate seeing someone else interested. So the turmoil you feel inside before you’re about to ask a question is because you think everyone will turn around and point the finger at you.

I told you I was an intellectual.

4. Chances are someone else has the same question

You share your birthday with about 20 million people, so it should come as no surprise that whatever question you have, someone else probably has it too.

There’s a reason why almost every website known to humankind has a FAQ section. Chances are that your thoughts are not unique, which is good!

Instead of beating yourself up that you don’t know something, remember that you probably have a strong baseline (education) to fall back upon, and you’re not as big of a dummy as you think.

The next time you’re scared to ask a question, tell yourself this: “Hey, I’m decently smart, and if I don’t understand this, then there are other people in the room that probably don’t either.”

Flip the internal story around, and you’ll be more relaxed knowing you’re not alone.

The biggest favor you can do yourself is to remember why you shouldn’t be scared to ask a question.

Please do it for your present self, but do it especially for your future self because one day, you’ll browse through your brain’s memory tabs and pull that information out.

And it’ll change the course of your life.

And if social anxiety decides to show up right before you ask a question, cut it off and say, “Sorry, ain’t nobody got time for that.”

I walk you through what it felt like to not be able to ask a question and the one thing that made me stop being scared to (missing out on knowledge and information that could further my growth).

Here are 4 things that helped me change my mindset and give me courage:

Go back up and read why each one of those to understand how they helped me stop being scared to ask a question.

I went from being scared to ask a question out loud to hosting summits online. I love coffee, french crepes, and working from home. My mission? Help others build their social confidence to make friends, have conversations, and be comfortable around people!

Did you find value in my content? Support me by clicking the button!

As a social anxiety expert I share my best strategies and tips that I’ve learned on my journey to help you manage your social anxiety.

Check out the blog!

Why Wednesday Doesn’t Have Social Anxiety 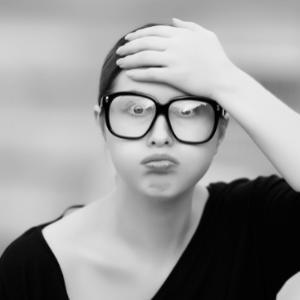 How I Put Myself On Social Media Even With Social Anxiety

Get the template that I personally used and create your own steps for your journey.

The “Be socially confident” newsletter drops weekly to inspire, entertain, motivate, and educate you about social anxiety (who knew it could be so much fun?!). Honestly, if anything, you’ll get a kick out of my own experiences and the funny GIFs.

I’m obsessed with social anxiety. In a healthy way! After a decade of being debilitated by it, I finally have the tools I need to manage it (the journey itself is no joke). I now use my experience to help others.

Stories over observations please 🙏 It's inter

The comments are the best part 💦 If you too ar

Let's talk about these 👇 I could have come up

There’s no substitute for effort, but you can speed up the process if you understand and take these five ways seriously.

Join the 5-day social anxiety challenge and get 1 task per day in your inbox. You’ll get 3 levels of difficulty for each task, so you can go at your own pace.